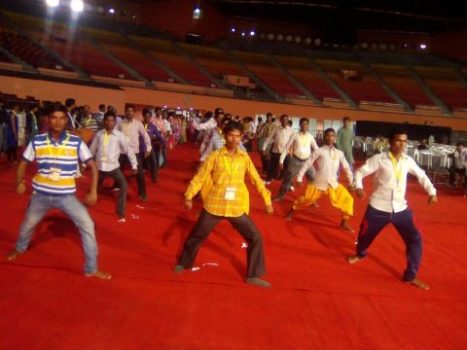 Picture shows Jharkhand tribal artists who will display their talent at National Tribal Carnival, 2016 will be held at Hall No 7, Pragati Maidan, New Delhi, between October 26-28.

The National Tribal Carnival, 2016 will be held at Hall No 7, Pragati Maidan, New Delhi, between October 26-28. Prime Minister Narendra Modi will inaugurate the event at the Indira Gandhi Indoor Stadium at 4 pm on October 25 2016.

The carnival is claimed to be an opportunity to experience the ‘rich diversity of tribal art, craft, culture and cuisine’. The three-day tribal bonanza is organised by Central Government.

A host of states including Jharkhand are expected to participate in the three-day event. Each state and its representatives are expected to showcase their art forms,Ashok Kumar Singh,Jharkhand’s Director Culture, Tourism Art and Culture.

As it is,there will be food stalls selling culinary delights from Jharkhand as well. Masterpieces of arts and crafts made by tribal artists from various states are reported to display their works.

In addition, culture programmes are slated to be staged by tribal artists. The state of Jharkhand will be a major participant at the carnival,said Singh. “It will showcase it various art forms at the event. Its major highlights include Nagpuri, PYKA, Chauu, Samthali, Kharia, Karsha, Mundari.”

In fact,seven Jharkhand groups,who have enthralled national and international audiences with their performances, are scheduled to perform their folk dance before the Prime Minister Narendra Modi at the inaugural function at the Indira Gandhi Stadium.

Notably,the Tribal Carnival is held every year. It is part of the government’s effortto preserve, promote and showcase various facets of the tribal life. It aims to present tribal culture tradition, customs and skills before a national audience. Also,it is an opportunity for tribal artists to reach out to the general public and explore the potential of their cultural offerings at a national level.