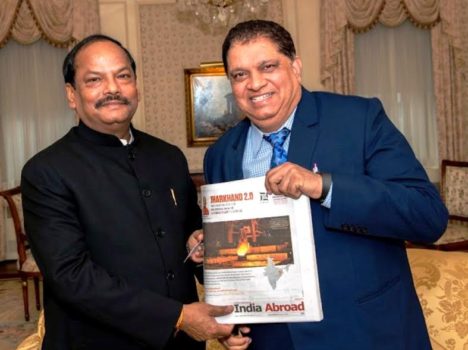 Calling on US investors and the Indian diaspora to contribute and invest for the economic growth of the state, Jharkhand Chief Minister Raghubar Das said- “India and the US have to continue to work together to realise the vision of Prime Minister NarendraModi and President Barack Obama of betterment of society and sustainable development for all.”

The Indian diaspora, which has made significant contributions to America’s economic prosperity over the years, should also play a role in the development of Jharkhand with not only their investments but their expertise as well, CM said.

An overseas community can and does serve as an important ‘bridge’ to access knowledge, expertise, resources and markets for the development of the State, said .Das. The Government of Jharkhand recognizes the need to pursue and promote the dynamic of the Diaspora and development, he added.

He said -in the almost 20 months that his government has been in power in the state, investments of about Rs 23,000 crore have come in Jharkhand.

Jharkhand is now among the top five states in the country on ease of doing business; he said underscoring that his government has put in place investor-friendly policies. Mr. Das added – his government is taking measures to ensure that its citizens get improved power supply. We have set a target of producing 20,000 MW of electricity by 2020, he said.

He addressed over 500 Jharkhand Diaspora at Royal Albert Palace, New Jersey and shared the vision of the State, in the presence of Riva Ganguly Das, Consul General of India, New York.

The CM invited each and every one to Global Investor Summit at Ranchi on 16 – 17 February, 2017 and declared to create a separate facilitation cell for Jharkhand Diaspora, and an online portal for the same. He assured for all possible help that the Jharkhand Diaspora needs, Government of Jharkhand would coordinate with concern authorities for mitigating the issues at the earliest.

Investors, entrepreneurs across the world are looking for markets and high growth consumer markets, which Jharkhand has plenty of , Said Mr. Sanjay Kumar, Principal Secretary to CM in his address . The potential opportunities in Jharkhand are being transformed into thriving businesses in services sector and global diaspora is keen to return to motherland, he added.