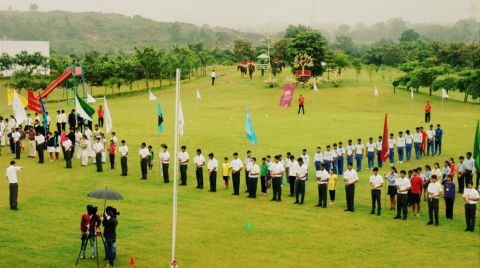 A solemn oath was taken by all sportspersons. Singh,who is an Ex Army man who had won 1970 Asian Games Silver Medalist and former chairman of Jharkhand Swimming Association, released a white dove as a symbol of peace and harmony and to set the tone of the games to be played with a spirit of true sportsmanship.

Taurians were privileged to have the following dignitaries who share a passion for the same sport at this mega event.Ram Kumar,Vice President,Swimming Federation of India,an International Swimming Refree,serves serves on the CBSE Committee as Observer Technical Committee.

Also present were Kamlesh nanavati,general Secretary,Swimming federation of India,Ahmedabad and Ajay Puni,General Manager,Radisson Blu,Ranchi.
The championship begins as participants take their mark to make a big splash in the 25’ x 17’ pool to the loud shouts and cheering of their teams. Day one of the championship came to an exciting close with the final event results.