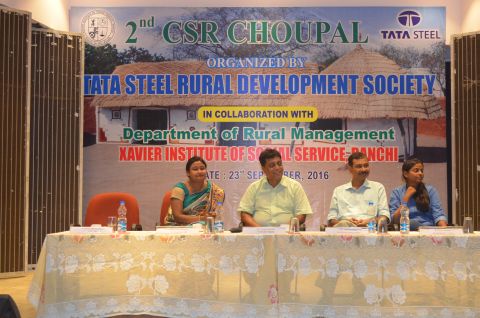 Incidentally,TSRDS has its main operating units in both Jharkhand and Odisha. It has been ranked with the number 1 position by the Economic Times. It has successfully maintained its position in the top 5 rank in the country, for the last 5 years, owing to its sustainable projects.

This program has been coordinated by Dr.Raj Shree Verma. Navya Bali, Second year student, Dept. of Rural Management, XISS hosted the event which started off with lighting up of lamp by the esteemed guests followed by a welcome speech presented by Prof. Dr. M.H. Ansari, HOD, Dept. Of Rural management, XISS.

He briefed about the main objective of the seminar that being, providing a good platform for the interaction between possible recruiters and the students. Also, he emphasised that how this event is a platform for the budding professionals to put forward their suggestions on how to enhance future CSR activities.

It was followed by Ms. Sreya Ganguly’s briefing on how TSRDS has been successful in spreading the awareness of its CSR activities. The stage was then shared by Ms. Neha Kumari, an alumna of XISS batch 2014-16 who shared her journey with TSRDS so far.

The event was further proceeded by Mr. Dibyahas Ray who pointed out the best thing in TSRDS being the opportunity of freedom of work, irrespective of the position one holds. With his simple stories, Mr. Ambika Nanda inspired the students and made them understand the importance of CSR activities.

The event was concluded with a fruitful interactive session between the TSRDS team and the students of Rural management. The lively discussion gave the students an opportunity to clarify even the most basic doubts.

A first year student, Dept. of Rural Management raised the question about TSRDS’s intervention plans which was addressed by Mr. Ambika Nanda. Few other questions were raised about TSRDS’s work with their own stakeholders and the monitoring of the vendors. The event was concluded with a vote of thanks proposed by Nisha,Second year student, Dept, of Rural Management, XISS. Many questions were raised and ideas were shared by the rural management students which was positively received the TSRDS team.