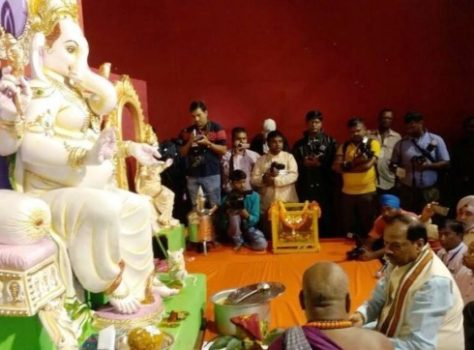 Hindu devotees on Monday paid homage to Lord Ganesh on the occasion of Ganesh Chaturthi across the country and Nepal.The scene was no different in Jharkhand where Chief Minister Raghubar Das offered prayers to Lord Ganesh in Jamshedpur.

At Kadma locality of Jamshedpur,Das inaugurated Ganesh Mahotsav and took part in Ganesh Chaturthi rituals.Notably, some areas of Jamshedpur fall in his Assembly constituency.

As it is,Ganesh Chaturthi is celebrated as a Hindu festival every year on the fourth day of the bright fortnight in the month of Bhadra (Bhadra Shukla Chaturthi) according to the lunar calendar.

Ganesh, the son of Shiva and Parvati, who is also known as Ganapati and Binayak, is revered as the remover of obstacles and the patron of arts and sciences. He is also the God of intellect and wisdom, according to Ganesh Purana. He is worshipped at the beginning of any religious ritual or undertaking.

Devotees particularly throng the temples of Bhagwan Ganesh in Ranchi,Dhanbad,Bokaro and Jamsedpur, Mumbai,New Delhi,as well as Ashok Binayak and Chandra Binayak in Kathmandu, Surya Binayak and Kamal Binayak in Bhaktapur in Nepal.