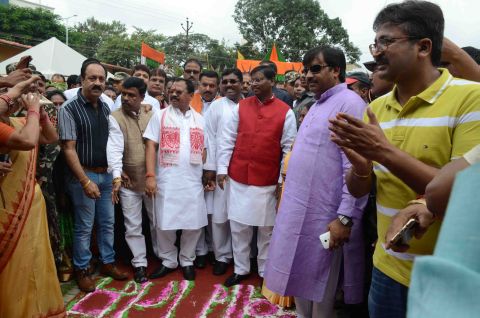 The headquarter office of the ruling BJP was packed with party workers and leaders.They had gathered to participate in the party function organised to celebrate the Day 1 of the newly appointed President of the BJP’s state unit in Jharkhand Laxman Giluwa.

Giluwa BJP MP from Singhbhum,who was appointed by the party high command last week,took charge of the new post on Sunday.Giluwa has his task cut out.His predecessor Tala Marandi,whose son had got caught marrying a minor girl and thereby generating a controversy forcing the party high command to sack him,had to gain confidence of the partymen.

Two,though the ruling party is basking in the glory of power both in the state and the country,many partymen appeared divided on the issue of the Raghubar Das government’s domicile policy.Though the policy was greeted and welcomed by a vast majority of non-tribals across the state,many tribals and their leaders,cutting across party lines,stood opposed to it.

Though the Raghubar Das government was understood to be trying to end these problems,the change was not clearly visible at the ground zero.”We want the state government to expedite the process and link partymen with the government functionaries at the state,division,district,block and panchayat levels”,said a BJP worker at Ratu.

In any case,party leaders looked united on Sunday when Giluwa took charge of the new assignment as senior party leaders including Chief Minister Raghubar Das and Ex CM Arjun Munda attended the event.”We are sure Giluwaji will be able to strengthen the party and take it forward”,said another worker.