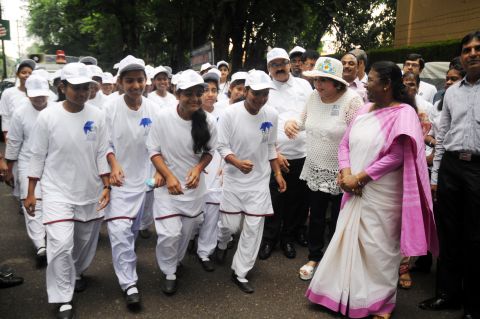 The Kashyap Memorial Eye Hospital on Saturday organised a ‘Run for Vision’ to create awareness about eye donation.

Over 1500 students of St.Xavier’s College and Ursuline Convent Girls High School,Purulia Road,Ranchi,participated in the ‘Run for Vision’ which began from the Ursuline school and ended at KMEH at Purulia road,Ranchi.A number of balloons were flown in the sky to mark the start of the event.

In fact,the Run for Vision was preceded by Dr Kashyaps’ campaign-Roshni-during which they mobilised more than 1200 eye donars from across the state.

In fact,KMEH led by Dr BP kashyap and Dr Bharti Kashyap’s campaign was observed on the sidelines of the National Eye Donation Fortnight observed from August 25 to September 8.

According to a meeting inside KMEH in Ranchi,Governor Draupadi Murmu appreciated the work done by Dr Kashyaps and praised the scientists who had made use of eyes of the dead person through operation and transplantation to get back the vision of a human .

As it is,approximately 20,000 new eye patients in need of eyes get added every year and a majority of the patients are young. The eyes donated by people can bring back vision in two-four corneal blind persons.

During the Run for Vision,students carried banners and placards which educated people about the importance of eye donation.

The staff of Kashyap Eye Hospital were also present.