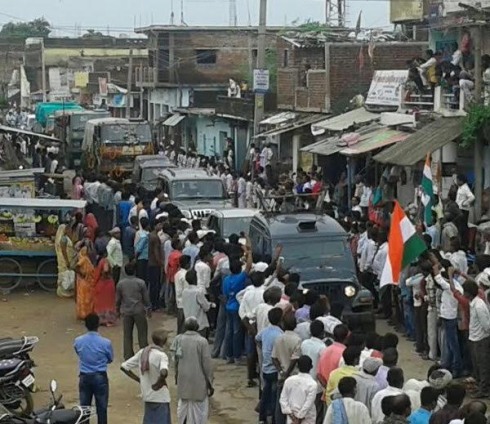 Chatra was numb with hundreds of people gathering to pay homage to the martyr Lance Naik Shakti Singh.Many of them were in grip of grief and anger.

All of them paid tributes to the martyr Lance Naik Shakti Singh whose body was taken to Chatra from Ranchi on Friday.

A long cavalcade of cars and a flower packed Army vehicle carrying the body reached Chatra.A huge crowd had gathered to pay tributes to the martyr.Many of them were heard shouting Bharat Zindabad-Pakistan Murdabad slogans.

The martyr’s father yelled and wept.”I want to go to the border and show strength to enemies”,yelled the father.The martyr’s son Shakti was in grip of tears.

Many state government functionaries including Governor Draupadi Murmu paid tributes to the martyr at the Army premise at Namkom in Ranchi.From Namkom,the body was taken to Chatra where last rites will be performed.

The Indian Army’s Lance Naik Shakti Singh was shot dead by terrorists The martyr’s body in Durgmula of Kashmir valley on Thursday.His body was brought by Naik Subedar Bahadur Singh.