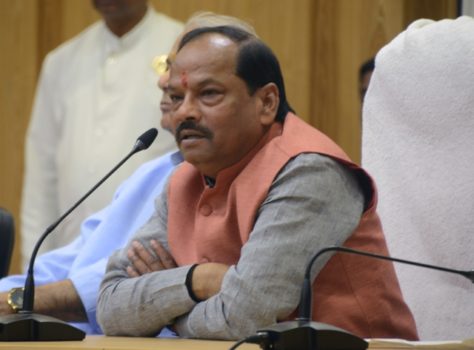 Picture shows Jharkhand CM Raghubar Das addressing a meeting of villagers of Dhenga,Barkagaon inside project Bhawan in Ranchi on August 16,2016

The CM said that the construction work of the NTPC’s under-construction R&R Colony,Dhenga,Barkagaon will be stopped with immediate effect.”The state government will get the land acquisition and rehabilitation issues examined by the third party and act on the basis of its findings “,said the CM.

The CM said that ‘politics will not be tolerated’.In the name of Naxalism and politics,no development project will be blocked.”Those displaced people,Jharkhandis,will be identified.There will be no game played over the land of its owners.All will be paid compensation and facilities as per the policy guidelines”,said the CM.

Incidentally,the Opposition led by the Congress and the Jharkhand Vikas Morcha had last week protested against the state government and the NTPC for acquiring the land of tribals.”Whatever are the grievances of the people will be looked into and examined”,said the CM.