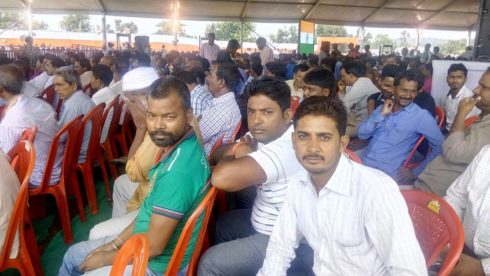 Now,a massive plan is afoot to build a food court and set up an open theatre at Ulihatu.’The construction work will start within a week”,said the CM.

Union Home Minister Raj Nath Singh was in Jharkhand on Saturday when he flew from Ranchi  by a chopper to Ulihatu,home village of the tribal revolutionary leader-Birsa Munda,in Khunti district.

Rajnath was accompanied by Jharkhand Chief Minister Raghubar Das.In fact,he is the first Home Minister of India to have visited and moved around Ulihatu village,now considered a hub ofMaoists.

Notably,Rajnath marked his presence by laying foundation stones for development projects worth Rs 5.38 crore at Ulihatu in Khunti district,40 KM from Ranchi.

These projects included foundation stone for development of Dombariburu,the hill covered with green forest where Birsa Munda had led a section of tribals fight a war against the British rulers in the last decade of the 19th century.
He also paid tribute to Birsa Munda and flew to Kitahatu village where he addressed a public meeting.Even before his arrival,Ulihatu had started receiving electricity.

In the afternoon,while Rajnath talked about development initiatives taken up by the BJP government at the Centre and the State,Raghubar Das promised get cemented houses built for 41 tribal families residing in Ulihatu who have been living in earthen huts since long.

As per the promise made by the state government officials,the paternal house where Birsa Munda was brought up was renovated and welcome gates put up to greet the Home Minister and the CM.