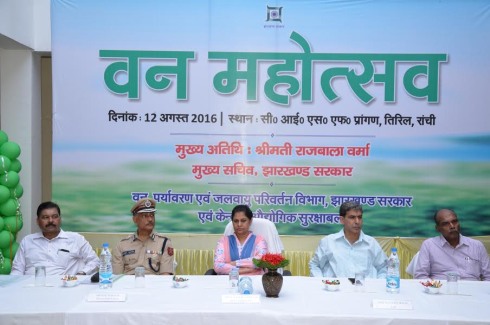 Senior officials of the state government made extra effort to ensure the proper plantation of saplings during a government led tree plantation drive-Van Mahotsav.

To do so,they got together inside CRPF premise in Ranchi on Friday and planted saplings.They were Jharkhand Chief Secretary Raj Bala Verma,Principal Secretary,Forest,Sukhdeo Singh and IG,CRPF,Anil Kumar participated in the function under the banner of -Van Mahotsav.

All of them delivered speeches and talked about the importance of tree plantation- in promoting the cause of forest and environment and containing pollution and climate change.

As it is,following the tree plantation drive started by Narandra Modi government,the state government led by Chief Minister Raghubar Das forwarded it across Jharkhand on July 1.During the past over one month,the state forest department had planted 2.5 crore trees in the state,claimed the department.