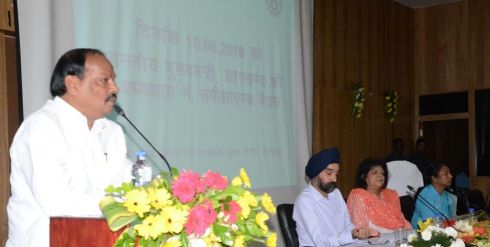 Jharkhand Chief Minister Raghubar Das on Wednesday reviewed the works of the Women,Child Development and Social Welfare Department by addressing a meeting of the Child Development Project Officers(CDPOs) in Ranchi.

Incidentally,during his ‘Sidhi Baat’ programme earlier,the CM had taken note of a complaint and declared that he will hold a meeting with CDPOs.Today’s meeting was outcome of the same declaration.

The CM made another declaration saying that after the rainy season ends,he will visit the field and inspect the development and welfare schemes undertaken by the state government.

The CM observed that the state government is committed to make Jharkhand free from malnutrition.