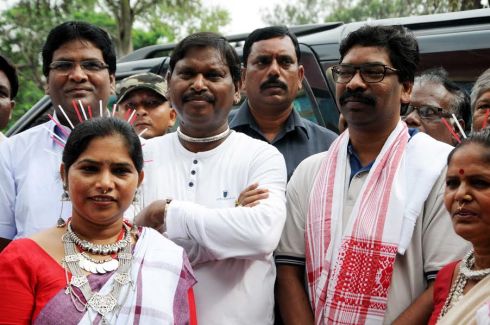 Shows9From Left to Right) Meera Munda,Arjun Munda and Hemant Soren among other Tribals celebrating International Day of the Worldâ€™s indigenous peoples on August 9,2016 in Ranchi,Jharkhand

Jharkhand,homeland of tribals,witnessed scores of tribals and their leaderscelebrating the International day of the World’s indigenous peoples.

Tribals,who cut across partylines and districts in the state,gathered in the state capital and exchanged wishes and greetings to mark the event.

The prominent tribal leaders who were spotted together in Ranchi were two ex Chief Ministers Arjun Munda with his wife Meera Munda and Hemant Soren on Tuesday.

In fact,it was first pronounced by the General Assembly of the United nations in December 1994,making the day of the first meeting of the UN Working Group on ‘Indegenous Populations of the Sub Commission on the promotion and protection of the Human Rights in 1982.