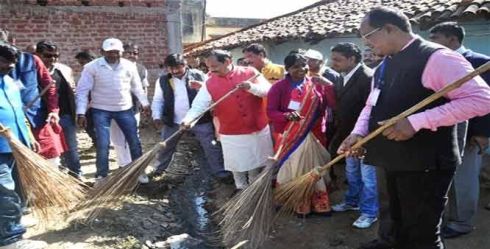 To achieve this target, the Department of Drinking Water & Sanitation in partnership with UNICEF Jharkhand is launching a 9 day state-wide campaign from 10 to 18 August to cover 2234 panchayats in 124 blocks across the state.

This campaign will encourage communities in rural areas to take up self-construction of household toilets. A State Resource Team (SRT) has been established for monitoring the district-wise activities and collating information based on extensive field visits on a day to day basis. UNICEF is providing technical support in the training of the State Resource Team (SRT); developing messages for the campaign and its documentation

Dr. Madhulika Jonathan, Chief of UNICEF Jharkhand stated, “Self-construction of toilets will give a momentum to SBM in rural areas. It is important from the community ownership and quality perspective. UNICEF is extending support to the Department of Drinking Water & Sanitation in tribal dominated districts of Lohardaga, Simdega & Gumla to ensure equity in sanitation.”

During the campaign period, a 3 day camp will be organized in all the targeted panchayats with the participation of a minimum of 4 members identified by the DC. In every district the nodal officer (ADM/SDO or counterpart) will gather information from all the panchayats on daily basis and share the daily progress with the SBM call Centre by 10 am next day via e-mail or telephonic conversation.

In the panchayats, households without toilet (whose name have been recorded in the base line survey conducted to in 2012) will immediately be given approval for self- construction of toilet in their household within 15 days. They will be entitled to an incentive of Rs. 12,000 paid through RTGS/cheque within 7 days of completion of toilet construction. The executive engineer will be the responsible person for the transfer of incentive amount to beneficiary.

At the panchayat level, based on verification done by the panchayat team a list of households missed in the base line survey record and incapable of constructing toilets in their homes will also be prepared. A separate list of households capable of construction on their own will also be prepared. This will include employees of the state government; contractual employees under state government; para-teachers/computer operators/anganwadi workers/sahayika/ANM/paramedics, etc. The applicants who could not join the camp earlier can submit their application on 17 August 2016.

The consolidation of this programme will be over on 18 August with celebration of Raksha Bandhan when brothers gifting a toilet to their sisters as a token of their love will be honoured with the title of ‘Bhai No. 1’.