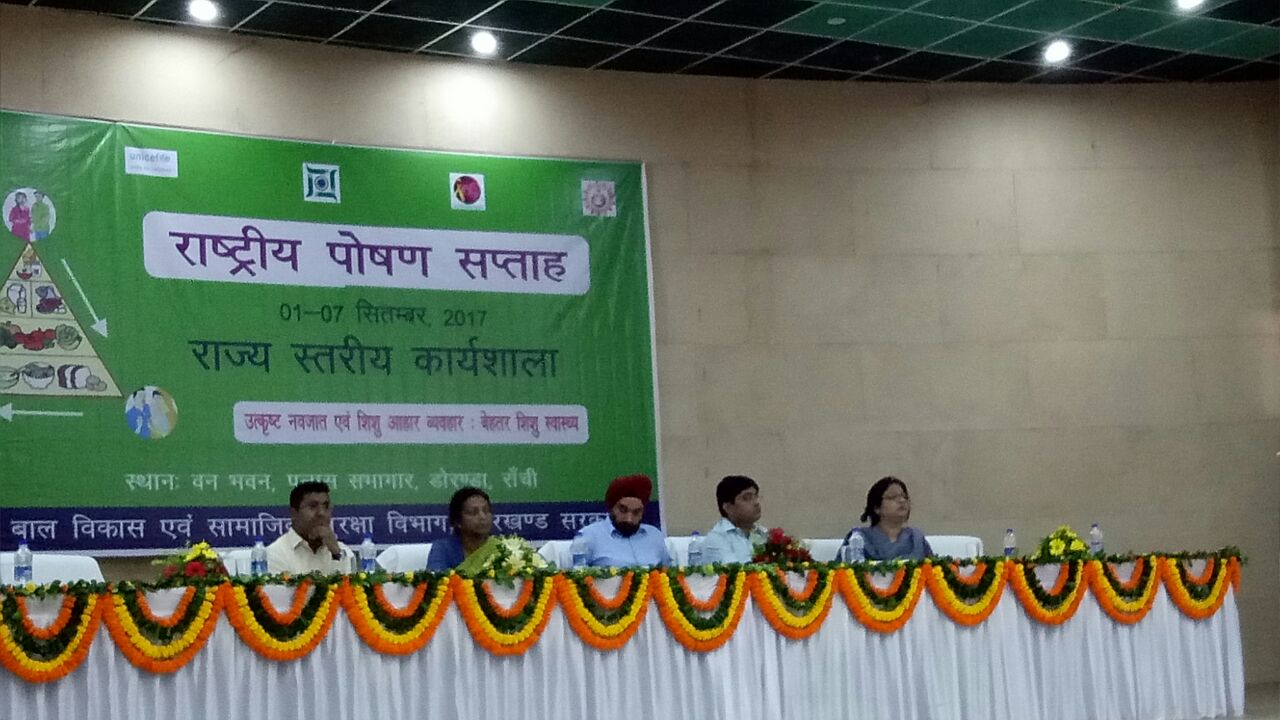 The National Nutrition Week is being observed in Jharkhand from 1 – 7 September. The week provides an opportunity to increase knowledge and awareness about mother and child health. The theme for this year is “Optimal Infant & Young Child Feeding Practices: Better Child Health’’

Dr. Madhulika Jonathan, Chief of UNICEF Jharkhand says, “The first 1000 days from pregnancy to the first two years of a child’s life provides a unique period of opportunity when the foundations of optimum health, growth, and development across the child’s lifespan are established. Yet too frequently poverty and its attendant condition, malnutrition, weaken this foundation, leading to earlier mortality or poor health and physical growth.”

There are 10 globally proven interventions to prevent under-nutrition among children and anemia among women. These include three breastfeeding practices (initiation of breastfeeding within one hour of birth, exclusive breastfeeding for first six months of life & complementary feeding from the 7th month along with breastfeeding) and reducing anemia among women & adolescent girls by providing them IFA tablets. Other interventions to reduce malnutrition are treatment of diarrhea/ pneumonia/ malaria in infants; ensuring routine immunization; use of toilets; hand washing with soap at critical times and care of pregnant women.

About 40- 60% under nutrition among children can be attributed to poor WASH conditions, primarily diarrhea, environmental enteropathy and other intestinal nematode infections. Recurrent episodes of diarrhea causes under nutrition as children eat less and their bodies absorb less nutrients; conversely an undernourished child is more prone to diarrhea and other infections. Significant proportion of faeco-oral contamination come not only from contaminated food, water and hand, but also from direct eating of soil and animal faeces  in course of play and exploration. People living in poor environmental hygiene, including open defecation, have higher exposure to vector borne infections. Intestinal worms not only compete for nutrients but also cause intestinal bleeding, and can cause frequent anemia and diarrhea. About half of all diarrhea episodes and a third of respiratory infections can be avoided by breastfeeding. Breastfeeding could prevent 72% of all diarrhea related hospital admissions and 57% of admissions for respiratory tract infections. (Lancet 2016)

Sanitation and hygiene interventions implemented with 99% coverage can reduce a third of diarrhoea incidences. Risk for diarrhoea can be reduced by 48% by hand washing with soap at critical times, 17% with improved water quality, and 36% with safe excreta disposal. Confinement of animals and poultry from children’s play area in homes can reduce incidences of environmental enteropathy and thus stunting among children. (Lancet 2013)