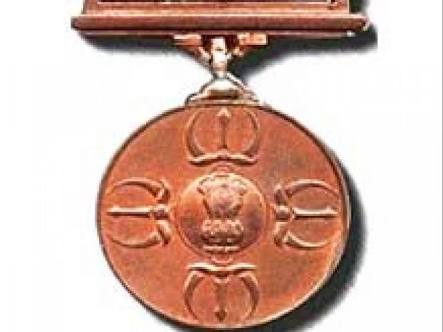 *Pic So a Swiss national lady of mixed Hungarian-Russian descent, married to an Indian Army officer, who had adopted to the Hindu ethos well, had designed the Param Vir Chakra.Have a look at it.

However, the question is who had framed the Param Vir Chakra?  The Indian Army records revealed that it was designed by Savitri Khanolkar, a Swiss national.Her real name was Eve Yvonne Maday de Maros. She was  married to an Indian army officer Vikram Ramji Khanolkar.

Savitri Khanolkar was born in Neuchatel, Switzerland to a Hungarian father & Russian mother. Her father André de Maday was a Professor of Sociology at Geneva University, while her mother, Marthe Hentzelt, taught at the Rosseau Institute.

In 1929, she met Vikram Khanolkar, a young Indian Army cadet, undergoing training at Sandhurst, who had come to Switzerland for a break. She was still a teenager then, however both fell in love, though Vikram was much older to her.

She came to India in 1932, though her father was not too keen on it & married Vikram in Lucknow. She changed her name to Savitri Bai after marriage. Inspite of her European background she quickly adapted to the Hindu tradition.

She became a vegetarian, learnt to speak fluent Marathi, Hindi & Sanskrit & also learnt Indian music, dance & painting. She called herself an European with an Indian soul & never liked being called a foreigner.

She had a deep interest in the Hindu Puranas, which she read extensively, as well as studied India's ancient history & it's legends. It was due to this Major Hira Lal Atal, first indigenous Adjutant General of independent India, asked her help in designing the Param Vir Chakra.

Drawing on her extensive knowledge of the Puranas, Savitri Bai thought of Rishi Dadichi, who gave up his own body for Indra to make the deadly Vajra or thunderbolt. She came up with the design of double Vajra, a common Tibetan motif then.

The Param Vir Chakra, is cast in bronze with a radius of 13/8 inch. In the centre, on a raised circle, is the Ashoka stambh, surrounded by four replicas of Indra's Vajra, flanked by swords.

Incidentally the first recipient of PVC, Major Somnath Sharma, was the brother in law of Savitri Bai's elder daughter Kumudini, who died while fighting at the Battle of Badgam during the 1948 War with Pakistan.

She also did a lot of social work, helping the families of soldiers killed in war, as well as partition refugees. After her husband passed away in 1952, Savitri Bai sought refuge in spirituality & spent her later years with the Ramakrishna Math.
She also wrote a book on the Saints of Maharashtra.