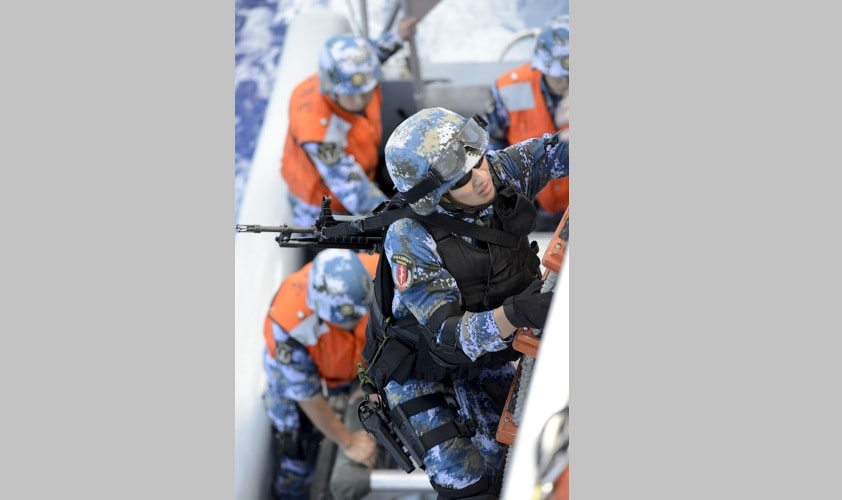 Many within China believe that its India policy is lacking strength and its military deterrence against India is proving ineffective. The questions doing rounds among Chinese strategic circles are that despite India’s “all-out attack”, why has the government still not taken “equal” countermeasures? Some Chinese strategists say the Chinese govt is either avoiding conflict, or it is secretly planning a counterattack

India’s capturing of key strategic heights along the southern bank of the Pangong Lake during the intermittent night of August 29 and 30 and the subsequent firing incidents at the Line of Actual Control (LAC) on September 7-8 marked a new round of escalation in China-India border confrontation, which has been going on since early May.

The Chinese government expressed its displeasure at these developments by apparently changing the official communication strategy that it followed since the beginning of the stand-off and seizing the initiative to launch a public opinion offensive by releasing its own version of the developments along the China-India border first and coming up with Chinese names for contested points at the LAC.

China’s state media too issued a series of threats saying India has “crossed all lines”, “it is standing awkwardly on the edge of a cliff”, “Indian military is not even a worthy opponent of the PLA” and thereby urged it to either withdraw troops “unconditionally” or be ready to get “wiped out” at the battlefield.

Even as Beijing seems to be beating the war drums, many within China are of the opinion that China’s India policy at this juncture is lacking strength and its military deterrence against India is increasingly proving ineffective.

The questions doing rounds among Chinese strategic circles are that despite India’s “all-out attack” vis-à-vis China (political-economic-military) post the Galwan Valley incident, why has the Chinese government still not taken “equal” and “reciprocal” countermeasures on ground against India? Why is China still talking about ‘resolute opposition’ but not announcing immediate counter-attacks? Why are the diplomats of both countries still exchanging goodwill? Looking at the trend, some Chinese strategists conjectured that the Chinese government is either avoiding conflict, or it is secretly and intensively planning a counterattack against India.

Why would China Avoid Conflict?

It is interesting to note that despite the charged atmosphere and heightened hostility, China’s leading India watchers like Zhang Jiadong, Lin Minwang, from the Centre for South Asian Studies at Fudan University, Qian Feng from the Tsinghua University, Zhang Guoqing of Chinese Academy of Social Sciences among others, have been advocating that “China need not overestimate the hostility of India and overreact" as India's "pre-emptive" military actions, “provocative gestures” like firing warning shots are not really meant to seize Chinese territory or mount a war against China, but to obtain a more favourable bargaining position in subsequent negotiations with China.

India’s strategy towards China, they say, is like ‘fighting without breaking, harmony but with differences’- the same strategy that China adopts vis-à-vis the United States.

Some of them are even not ruling out a sudden “turn-around” in China-India ties as a fall out of the ongoing border crisis. It is being argued that be it 1987 border conflict followed by the then Prime Minister Rajiv Gandhi’s China visit in 1988 and the subsequent opening of a new chapter in China-India ties, or the 1998 India’s nuclear test followed by the then Prime Minister Atal Bihari Vajpayee’s China visit in 2003 and major decisions taken on the border issue, China-India relations have always emerged stronger from the brink of war.

The present confrontation too, they argue, may lead to similar major consensus, if the leadership of both countries seek to turn this “crisis into an opportunity” by further communicating, solving problems and reaching new consensus.

So, why are some of China’s top strategists still talking peace?

The concern over international pressure and China’s isolation apart, yet another key reason behind Chinese government’s unwillingness to “take the bait of a military conflict under Indian pressure” could be due to its perceived “serious quantitative disadvantage” in terms of military deployment along China’s western frontier.

China’s internal debates and discussions made repeated references to how unlike India which has always considered its northern and north-western borders with China and Pakistan as the gravest national security challenge and made meticulous preparations all along, and where the same deployment can provide defence against both the adversaries to some extent at the same time, China’s national defence focus in the last 70 years have shifted from north to south and southeast but never so much to the southwest.

Since the Doklam incident of 2017, many Chinese strategists have been flagging the concern that China may not be adequately prepared for a military conflict in its southwest, that it still does not have a local military advantage along the China-India border and that it cannot really support a small scale battle victory here.

Making matters worse, China’s dire needs for better deployment at its Western frontier has now met with an unprecedented population crisis. “The 40 years of one-child policy has left a gap in China’s demography where the young population is becoming greatly insufficient for large scale deployments at the battlefield and for other economic activities,” read an article in Honggehui, a website with Maoist lineage.

It is in this backdrop, there is a palpable unease among Chinese strategic circles over India’s massive troop deployment at the LAC. It has been noted with great concern on various occasions that with India reportedly stationing more than 200,000 troops at the frontier, the ratio between Indian and Chinese forces at the LAC may have become an alarming “4:1, 5:1 or possibly even higher”.

However, in recent years, (while China is yet to make major headway in terms of deployment along the China-India border), India’s infrastructure development has been making rapid progress. This has broken the original balance of power at the border India now wants to use its tactical advantages to counter China's overall strategic advantages.”

Various commentaries in the Chinese internet strove to assuage this concern, by arguing that modern warfare is all about science and technology, where troops are really only “a living target”/ “cannon fodder” in front of precision guided weapons.

In the context of high altitude operations, equipment, supplies, and mobility are much more important than manpower. Others made vile attacks on India “for sending such a huge number of troops without adequate preparations for winter”, and condemned Indian culture for not valuing human lives enough and eulogising self-flagellation or life sacrifices, which they say is “unthinkable” in the Chinese culture and very difficult challenge for China to handle.

Some Chinese articles even compared India’s massive troop deployment at the frontier and its decision to spend the harsh winter at the LAC with India’s non-cooperation movement against the British, where in the Chinese perception, Indians through self-flagellation “embarrassed or rather disgusted” the British to make concession and ultimately agree to India’s freedom. “If this is a battle of will power”, warned Lin Minwang, “China should not underestimate India, given its track record (of freedom struggle movements) and how it has challenged Pakistan over the Siachen Glacier, allowing its soldiers to stay in freezing cold for years”. The Indian military, Chinese strategists infer, has hundreds of thousands of soldiers to sacrifice and will never give up easily.

Is China secretly planning a counterattack?

By occupying the key strategic heights in the south bank of the Pangang Tso, particularly the Black Top, Indian forces seem to have touched a raw nerve among many within Chinese strategic circles.

There has been much displeasure over the fact that in 1962, the People's Liberation Army had reportedly seized this highland with “82 casualties”, but now it has been recaptured by India “without firing a single shot”, which they say is “totally unacceptable”.

It is further argued that given the current state of preparedness among the Indian military, it is very difficult to regain this highland through a hand-to-hand combat, while it is equally unrealistic to expect India to back down through negotiations and thus there has been a growing clamour among Chinese military circles for a forceful counterattack against India.

Other than that, the use of Special Frontier Force (SFF) by India in the China-India border confrontation has been yet another sore point and the consensus on this issue among Chinese strategists seems to be that “the reactionary force based on hatred towards China, the minions of India can only be physically eliminated.”

However, some Chinese strategists believe that by not reacting immediately, the PLA is actually buying time, building strong defences and fortification so as to launch a more severe counterattack in a more appropriate time.

Rumours are rife in the Chinese internet that China will take the opportunity of the US election to carry out a military expedition either against Taiwan or against India. Christmas time is also seen as an opportune moment for a counterattack against India when the US will stay distracted, and India will also be inconvenienced due to heavy snow.

The idea is to carry out “a small scale conflict at the tactical level” or an ambush attack by luring Indian troops into the Chinese territory. However, if this gets escalated into a larger military conflict, Chinese generals like Wang Hongguang, a former deputy commander of China’s Nanjing Military Region, suggest a four pronged strategy to deal with India, firstly, by seizing air supremacy over Ladakh and simultaneously capturing electronic control systems, destroying India’s command network, air defence network (radar network), and air command network, secondly, targeting India’s key infrastructures, artillery positions, armoured clusters, logistics storage warehouses, oil depots etc., thirdly, occupying key strategic heights, dividing and trapping the Indian deployments by cutting off the Depsang Plain and the Siachen Glacier, and finally, occupying National Highway 1 from Srinagar to Leh and thereby cutting off the connection between Ladakh and the outside world.

This way, China, if willing, can seize the whole of Ladakh in case of a large-scale military conflict with India, he further asserted.

Similarly, Chinese internet is full of commentaries urging the PLA to use its propaganda machinery to exploit caste and religion-based fault lines in the Indian military and create rifts between its officers and soldiers to bring down the morale of the Indian forces. They further advocated formation of a joint front with Pakistan, Nepal, Bangladesh and others to launch a combined offensive against India where “China recovers Ladakh, Arunachal and the northeast, Pakistan captures Kashmir, Nepal gets its claimed land, Sikkim becomes independent, Bangladesh gets West Bengal, Bhutan comes out of India’s shadow and India is reduced to its princely state era.”

Regardless of whether China chooses to escalate or de-escalate, the present tension at the LAC, we in India should take note of the fact that as a direct fall out of the present crisis and before that the Doklam standoff of 2017, a greater realisation has been setting in within the Chinese strategic circles that India in the west, with 3 million square km of land area, with a comprehensive national strength ranked fourth in the world, with 1.3 billion people with an average age of 27 years, who has always considered China as an adversary, is a bigger threat to China’s rise than even the US in the east, which is a relatively aging society, a globally stretched out troops and against whom it believes it enjoys some sort of local military advantage.

In fact, there has been a growing consensus in China that a China-India conflict is somewhat inevitable, if not now, but in the future and most likely earlier than the Sino-US conflict and if China handles this well, it will provide more mileage to China at the global level but if it falters, “the China-India conflict in the new era will mark the beginning of China's decline.