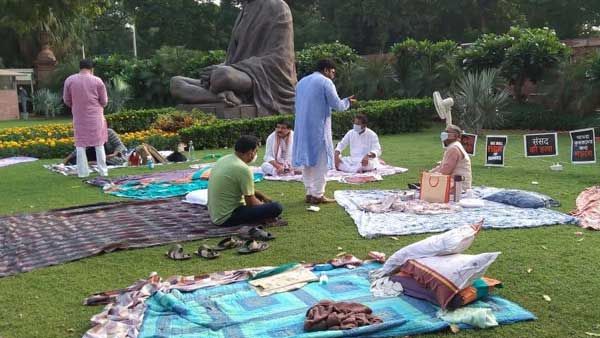 *Picture shows Harivansh sitting on right side near the statue of Gandhi in Parliament premise.

Scores of people in Bihar, Uttar Pradesh and Jharkhand flooded social media platform appreciated  Rajya Sabha Deputy Chairman Harivansh for displaying his gentle conduct inside the Rajya Sabha and outside during the past three days.

On Sunday and Monday, the Opposition MPs targetted him. Massive chaos occurred during a vote on farm bills.Some Opposition MPs insulted him. But Harivansh shows the videos,.remained cool and calm.

In response, Chairman Venkaiah Naidu suspended eight opposition members of the Rajya Sabha. All eight proceeded on dharna and spent the Monday night on the lawns of the Parliament complex.

Today, Harivansh came with a bag and served them tea and snacks early morning. Though they had sipped cups of tea, a couple of suspended Opposition MPs rebuffed his act and dubbed him as "anti-farmer."

As if he had not heard them, Harivansh announced a one-day fast against the "unruly behaviour of the opposition."This was greeted by Sudhir Kumar in Facebook saying,"Desh Ka Neta Kaisa Ho, Harivanshji Jaisa Ho(What kind of leader the nation needs; He should be like Harivanshji)

A random survey carried by www.jharkhandstatenews.com revealed that at least 123  out of 350 examined youths, students, teachers, advocates and sales executives on Facebook and Instagram have expressed identical opinions.

Gopal Karmakar thanked Prime Minister Narendra Modi for coming out strongly in support of Harivansh."To personally serve tea to those who attacked and insulted him as well as those sitting on Dharna shows that Shri Harivansh Ji has been blessed with a humble mind and a big heart. It shows his greatness. I join the people of India in congratulating Harivansh Ji," PM Modi tweeted.