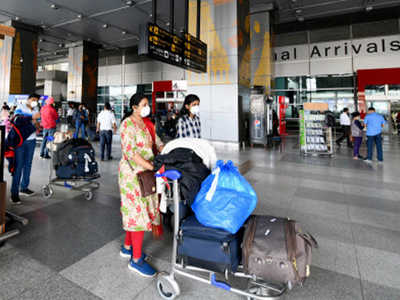 A day before the nation celebrates Gandhi Jayanti on October 2, all flights of Indigo and GoAir will start operation from the T2 terminal of the Delhi Airport.

As a result, the Delhi airport will resume flight operations at the T2 terminal from October 1, said its operator DIAL on Monday.

As it is, the Delhi airport was operating flights from the T3 terminal only ever since flight operations in India were curtailed drastically due to the coronavirus pandemic on March 23.

"The resumption of operations at T2 will be with 96 air traffic movements (48 departures and 48 arrivals) per day and increase progressively up to 180 by end of October," states DIAL in its press release.

"From October 1, IndiGo will operate all its flights with call signs between 6E2000 and 6E2999 from the T2 terminal."

Alongside, entire flight operations of GoAir will be conducted from the T2 from October 1, states the Delhi International Airport Limited (DIAL).

"About 27 counters 11 for GoAir and 16 for IndiGo - have been created to cater to passengers of respective flights," the DIAL noted.

India resumed scheduled domestic passenger flights from May 25 but in a curtailed manner. Airlines are allowed to operate not more than 60 per cent of pre-COVID domestic flights currently.