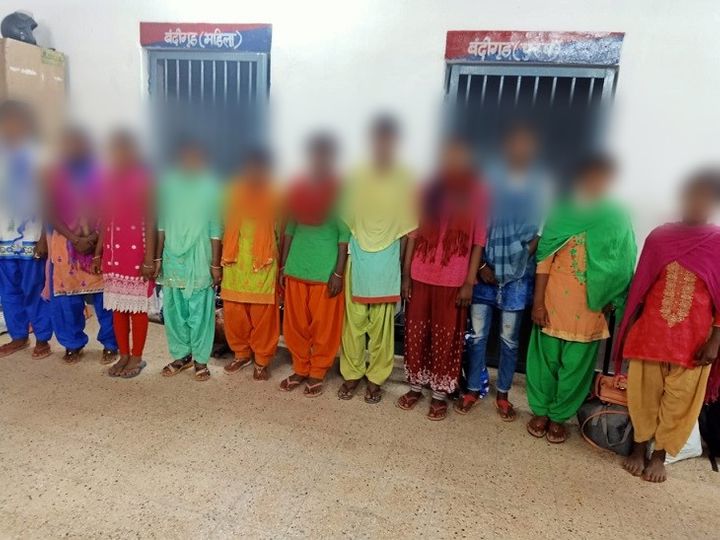 *Photo shows 14 rescued including eight minor girls and the trafficker who was arrested, standing inside Kotwali police station, Ranchi, capital of Jharkhand. Among these girls, one girl(last on the right side) was barefoot.

The girls from Jharkhand are usually trafficked for the purpose of forced labour, including for work in commercial, agriculture, and domestic work.

This time 14 girls including eight minor girls who were being taken to Hyderabad in Telangana from Latehar in Jharkhand were rescued by the police.

The Anti Trafficking Unit sleuths of the Kotwali police station in Ranchi city have arrested one person on charge of indulging in human trafficking, according to the FIR filed by the police on Friday night.

The police say all victims including minor girls were being taken to Hyderabad by Hatia-Hyderabad bound train. The girls had reached the Ranchi railway station on Friday morning. Soon, a Railway Protection Force(RPF) jawan asked one of the girls, where are you going. The girl replied, "I don't know.'

Then, the RPF jawan asked who are there with you. This question and answer made by this RPF jawan made him aware that eight minor among 14 girls were being trafficked. Soon, he nabbed the trafficker.

"We have learnt that there is a network of traffickers across the country. They lure them by paying money to poor parents of these girls. We will bring them to the book soon", said a police officer.

Now, while the process to complete investigation is on, efforts were also being made to send these rescued 14 girls to their respective homes in Latehar district.