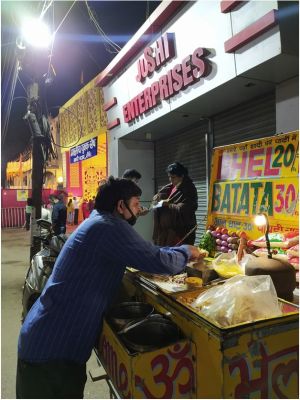 Never Durga puja was celebrated in Ranchi as it is witnessing now. There is no crowd in any pandal. No traffic jams. Everywhere festivity is missing.

In the past, Durga Puja was an important festival in Ranchi city where pandals were made on different themes, each connected with national and international phenomena such as World Trade Centre, Bamboo Art and so on.

Always, the streets were lit up. The swings and the high-rise Mary-Go-rounds along with various magic shows were put up near Pandals. The smell of Chaat and Chinese food sold by vendors along the roadsides invited people from all class, caste and religion.

None of these were visible in Ranchi in 2020, thanks to the Jharkhand government’s preventive action, anticipating that the puja can catalyze the spread of the virus many folds. It specifically stated in its order in early October that “Puja may be performed in specially erected small Pandals/Mandals, where it has been done traditionally, only with the objective performance of rituals without groups of people’s participation. Durga Puja and Mandap shall be covered from all sides to prevent any public view of the idols. Puja Pandal/Mandal shall not be constructed on any theme,”.

The government prohibited any kind of lighting and stated that the maximum area of the puja pandals shall leave an open space, other than the site occupied by the idol. It also prohibited fair and food stalls. “There shall be no music or any other entertainment/cultural program. No community feast/Prasad or Bhog distribution function shall be organized. No invitation shall be issued in any form by the organizers of Puja Committees,” said the govt’s order. 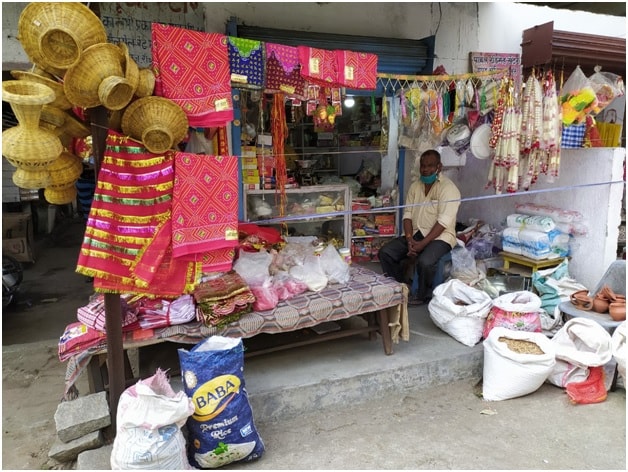 However, due to objections raised by the puja pandal organizers and political parties including the ruling JMM  and the opposition BJP, the government amended its order and came up with a few relaxations. For instance, it allowed the public address system from 7 P.M TO 9 P.M only for live chanting of mantras/paath/arti and the number of people inside the pandal was increased to 15 persons at a go.

The feast and melas have suffered untold miseries. Unlike the past when street food shop owners, toy sellers and other vendors earned and saved money. This time due to the pandemic the scenario is not as usual.

Anand Kumar, who owns a chaat thela near overbridge, has put up a notice on his thela stating that “please don’t ask for extra papdi.”He informs  that due to the lockdown his business was shut for a long time. This led to the drying up of his savings. Even when the markets opened up, the buyers were not turning up in large numbers. The income is not sufficient to meet the basic needs of my family.”

Anand also states that the price of basic inputs for chaat such as onion has increased to Rs 80 a kilo. This has created another hardship, he cribbed.

A shop owner Manto, who sells puja accessories in Ranchi states that “it is true that the relative sale as compared to past years is down.The people are spending in limited sum”.He continues “few people are coming to buy in his shop. “

According to Mahto, the steps taken by the government to restrict the puja this time is a wise step as there are high chances of contamination in public gatherings. He is optimistic about a better Durga puja next year when the world will be free of coronavirus.

Shankar  Mondal, who sells toys near Albert Ekka Chowk, states that “I have two daughters. Both are in high school. Earlier, I used to sell toys on three days of Durga Puja -Saptami, Ashtami and Navmi -and consequently earned some amount to take my daughters to see Ravan Dahan on Dussehra. This time I am not even able to earn the amount which I have invested to buy these toys”. He says he had borrowed a huge sum of money from his in-laws to pay his daughter’s school fees and buy a smartphone for them so that they could attend online classes. He had plans to pay back the dues by the earnings during the puja period.” This plan is smashed”.

The streets of the capital city of Jharkhand used to be packed with people walking around on roads to see the thematic pandals and the lighting. This is not visible this time. Though there are barricades put up at a distance of a few hundred meters from the iconic Pandals at Bakri Bazar and station road, the traffic was so thin that anybody can directly drive down and reach the pandal gates to have a glance at the idol.

Songs praising Goddess Durga were heard in all parts of the city in the past. This is absent this time. The puja in various pandals have been streamed online as well. There are no fairs, no melas.The puja amid pandemic seems pale, missing the colours and lights and show.