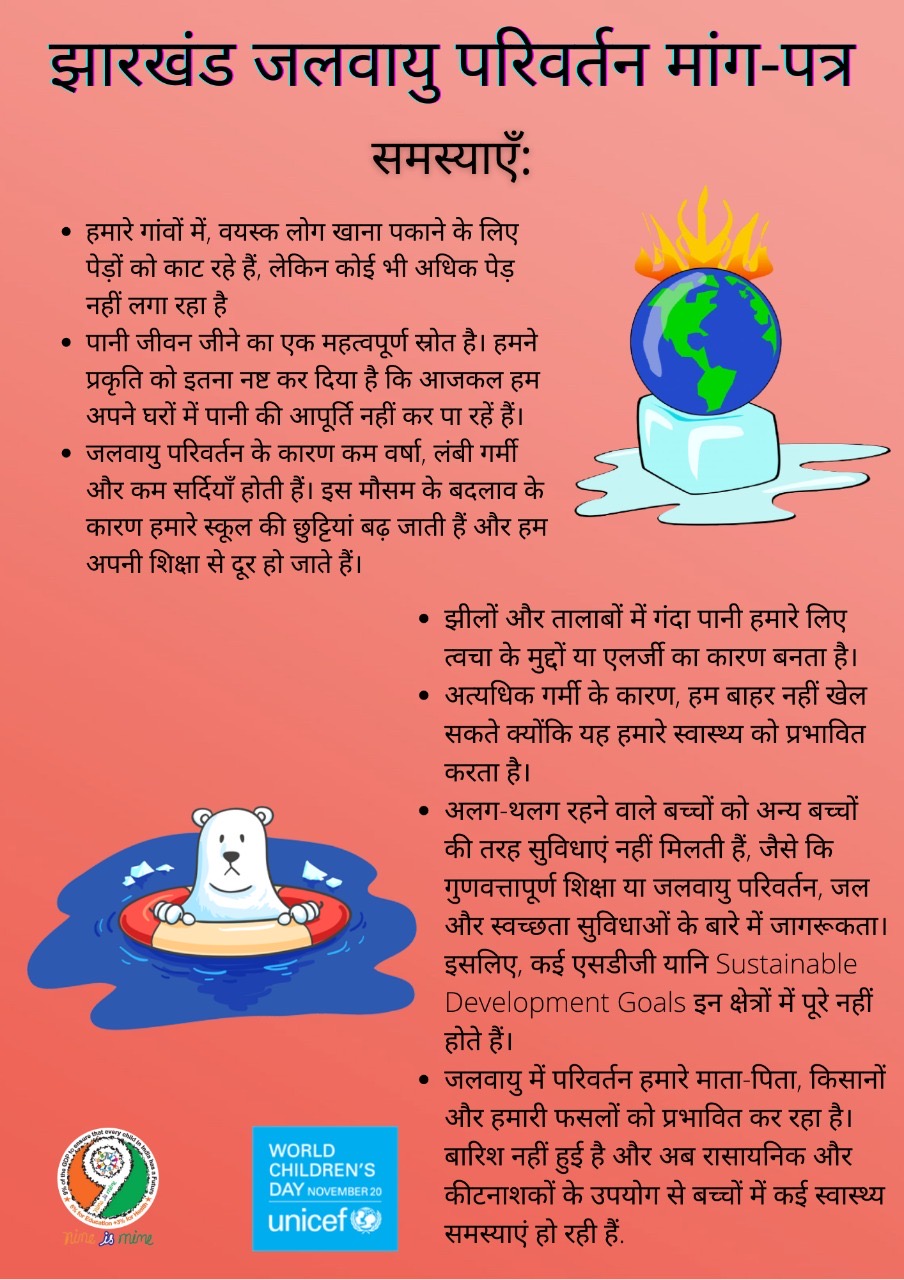 “Children are the least responsible for climate change, yet they will bear the greatest burden of its impact.”

World Children’s Day (WCD) is a global day of action for children, by children, marking the adoption of the Convention on the Rights of the Child (CRC) on November 20 in 1989.

In India, a week of activities and events are being rolled out from National Children's Day on 14 November leading up to WCD.

Climate Change is a key theme of the WCD celebrations in India. Young people across the world are speaking up about climate risks and the action that governments across the world need to take.  UNICEF Jharkhand in partnership with NINEISMINE (PRATYeK) organised a State Children’s Climate Parliament today to enable young citizens of Jharkhand to proactively engage on Climate Change and the Sustainable Development Goal 13 of the United Nations.

Children also presented a charter of demands on climate change which they have been working on since the last seven months. Young people were inspired with the presence of eminent people such as Mr. Prasanta Dash and Ms. Astha Alang from UNICEF Jharkhand and Steve Rocha from PRATYeK/NINEISMINE.

or their recommendations and ask their leaders and policy makers to bring a positive change for the betterment of the greater earth community.

Mr Amrendra Pratap Singh, Principal Secretary, Forest, Environment & Climate Change Department, GoJ, said, “We need to increase forest intensity in the state, for that we should make people aware to use their backyard for plantation. We also need to reduce wood based fuel, so that carbon footprint could be reduced. Children can play an important role in this regard by making people aware to not cut trees and reduce the use of natural resources. The need of the hour is to reduce our greed and control our needs.”

Ms Deepika Pandey, Member of Legislative Assembly, Jharkhand, said “The present generation is much ahead of us. They are very aware about climate and environment. I want to congratulate these children for their wonderful work. We all need to come forward to save the  earth, so that it could make our lives better for the children.”