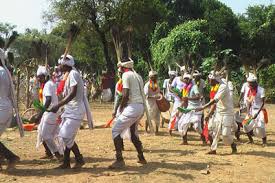 At a time when the farmers' agitation was rocking the country, the ruling BJP seems to be caught in a classical case of Catch -22 over the issue of the Sarna Code.

If the BJP government led by Prime Minister Narendra Modi okays the resolution passed by the Jharkhand Assembly on the Sarna Code, which allows tribals to identify themselves with a separate religious entity, the JMM led by the CM Hemant Soren and its allies including the Congress and Trinamool will claim victory.

If the Modi government decides not to do so, it can provide an agenda to these parties to dub it as anti-tribals in the forthcoming Assembly polls in West Bengal.

As it is, after winning Bihar, the BJP has formulated ambitious plans to take on the Trinamool Congress chief Mamata Bannerjee and spread its footprints in West Bengal, where Assembly polls are due in 2021.

The BJP has already launched an aggressive campaign in the neighbouring West Bengal having a substantial population of tribes along the Jharkhand and Odisha border. However, the move by the Hemant Soren government to adopt a resolution on Sarna Code has put the saffron outfit in a quandary as the issue has been snatched by the Jharkhand Mukti Morcha (JMM).

It can directly affect the tribal population of West Bengal in the areas bordering Jharkhand. In fact, before the Jharkhand Assembly elections last year, the BJP had promised that it would implement the demand for a separate Sarna Code in 2021 when a fresh Census begins.

But the BJP and allies lost due to the perception that the then Chief Minister Raghuvar Das, a non-tribal, played into the hands of the non-tribal population much to the discomfiture of the tribal gentry.

The resolution tabled by Jharkhand CM Soren was adopted by voice vote in the state assembly on November 12. If it gets a sanction by the NDA government at the Centre, there will be a separate column for Sarna as a distinct religion in the Census index in 2021.

At present, Sarna is not included in the list of religions. Despite this, over 40 lakh tribal population from Jharkhand and nearly 6 crore people from across the country enlisted their religion as ‘Sarna’ in the 2011 census even though it was not mentioned in the Census columns. The Gonds and Bhils follow a separate region.