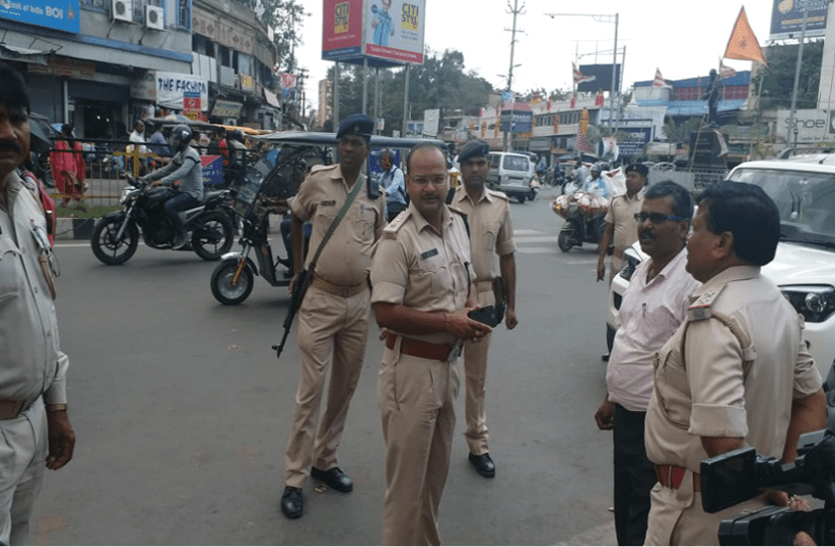 *Seen are police personnel in the Main road, Ranchi where shops remained open and traffic was normal.

The Bharat Bandh over the Narendra Modi government's new farm laws evoked a partial response in Jharkhand today with government offices functioning, as usual, private institutions and shops opened in Ranchi, some shops closed in some areas, while local traffic was near normal.

The long-distance vehicles remained off the roads, due to fear of violence, said the police.

Protests and demonstrations by a handful of the Congress, Left and the JMM were held in Ranchi, Dhanbad, Hazaribagh, Jamshedpur, Palamu, Dumka, Bokaro, Sahibganj and Pakur but no untoward incident was reported from anywhere.

Director-General of Police MV Rao said that the situation in all the districts was peaceful.

All the central government and state government offices were functioning normally in Ranchi. Some private establishments were shut, while more than half were open.

There was no significant impact of the shutdown on local traffic in all districts, while inter-state bus services and the movement of long-distance vehicles were affected due to the withdrawal of services by transporters.

In a small village Pattabari in Dumka, a dozen JMM supporters were spotted blocking the road, stopping vehicular movement for some time.

In Palamu's Medininagar, Kisan Sabha state executive president KD Singh led a demonstration along with dozens of activists, protesting against the farm laws.

Protesting farmers blocked the Kolkata-Delhi national highway at Kishan Chowk in Dhanbad in the morning for an hour, disrupting traffic.

However, operations were normal in the coalfields in the state. Though the trade unions supported the shutdown, Bharat Coking Coal Limited (BCCL) officials said coal mining and dispatch remained unaffected.