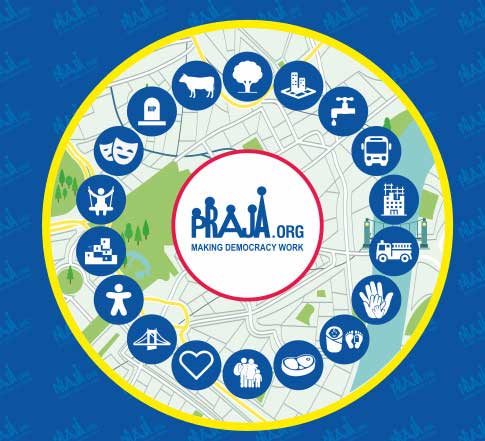 Recognising the need for reforms in urban governance, Praja conducted an Urban Governance Reforms Study visiting 40 cities across 28 states and National Capital Territory (NCT) of Delhi, over a period of three years (2017-2020). The study involved a total of 1568 interviews held with key stakeholders such as the city Elected Representatives (ERs), city administrators and city based CSOs.

“The UGI consists of four themes which are divided into 13 sub-themes and consists a total of 42 indicators. The themes focus primarily on the Structural aspects of Urban Governance. The four themes include Empowered Local Elected Representatives and Legislative Structure; Empowered City Administration; Empowered Citizens and Fiscal Empowerment.

The idea behind building the UGI is to understand the level of decentralisation of Urban Governance.”, stated Milind Mhaske,Director, Praja Foundation. Mhaske further stated that the UGI ranked total 29 cities  across 28 States and NCT of Delhi.

Mhaske added, “The ranking in the Index is a relative ranking but if we look at the absolute score, none of the top 5 states have scored more than 57%.

Amongst the 42 indicators, most of the states have achieved the lowest scores across indicators. This shows that there is a need for urban governance reforms and empowerment of city governments across India.”

Mr. Prabhat Kumar, President, IC Centre for Governance (ICCFG); Former and First Governor of Jharkhand; and Former Cabinet Secretary, Government of India said, “Over the years the subject of facilitation and empowering of local governance seems to have faded. Despite the Constitution (Seventy-fourth Amendment) Act, 1992, cities continue to host multiple issues that affect the environment and the lives of people. We are aware that empowerment of city governance is fundamental for providing adequate infrastructure and efficient services to the people. However, it is time that we define ‘Empowerment’ and develop solution towards the crux of it.”

Below are the key highlights from the Urban Governance Index –

• Odisha ranked first in the Urban Governance Index with the score of 56.86. Followed by Maharashtra ranked second with 55.15 score, Chhattisgarh ranked third with 49.68 score, Kerala ranked fourth with 48.77 score and Madhya Pradesh ranked fifth with 45.94 score.

• Jharkhand, Arunachal Pradesh, Meghalaya, Manipur and Nagaland are the bottom five states with scores less than 20 each.

• The state of Kerala has the most empowered city elected representatives and legislative structure with score of 18.63 out of 30.

• Tamil Nadu has the most empowered city administration amongst the 29 states with a score of 5.83 out of 15.

• No state has devolved all 18 functions mentioned in the Twelfth Schedule of Constitution of India to the City Governments.

• 9 out of the 24 cities do not have any elected representatives from the City Governments as members of the Smart City SPV board.