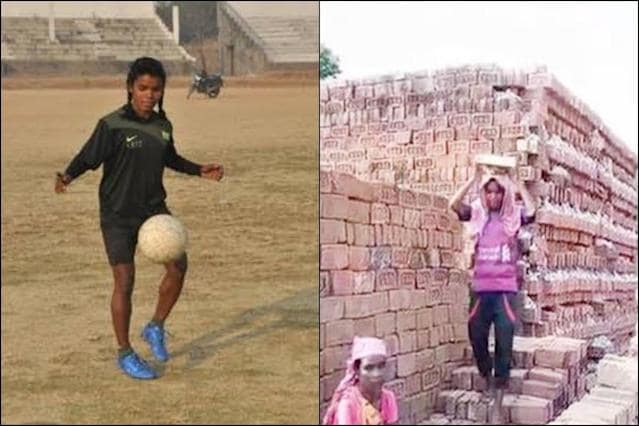 An International footballer has gained the spotlight as a  brick kiln worker at her village — Bansmuri village in Baghmara block of Dhanbad.

After a video scribe recorded and her story was flashed by many agencies including The Telegraph and The New Indian Express and  News 18, she attracted the attention of concerned authorities.

In response, Jharkhand Chief Minister Hemant Soren is set to come forward and provide the government’s support. However, towards her case, the first to respond was National Commission for Women(NCW) chairperson Rekha Sharma.

Sharma has written to Sukhdeo Singh, Chief Secretary, Jharkhand asking him to extend help and support to Sangita so that she can live her life with dignity and feed her family. A copy of the letter has also been sent to President, All India Football Federation,’ the women’s body said.

Sangeeta burst onto the scene following a successful outing as a member of the Iwith the under-18 Indian team in Bhutan and Under-19 team in Thailand, both in 2018. Soon, she was called up in the national side last year but the lockdown and discontinuation of competitive tournaments forced the tribal girl to go back home only to work there as a labour to support the family,

Investigations revealed that this 20-year old had an ailing father who is blind and has a hearing impairment and needs regular medicines. Her elder brother works as a daily labourer but with an irregular income, she has been forced to work as a Reja(labourer).

Stating that the condition of football player Sangita Kumari brings “embarrassment and shame” to the country, NCW Chairperson Sharma asked Jharkhand CS Singh to address the issue on priority.