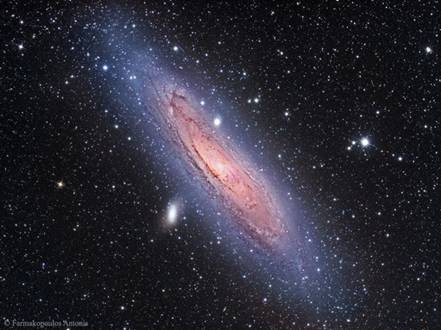 *The Andromeda Galaxy, the nearest major galaxy to our own, the Milky Way. [Image Credits: FarmakopoulosAntonis]

A Raman Research Institute(RRI) researcher has estimated the three-dimensional distribution of molecular and atomic hydrogen in a nearby galaxy which can help lead to clues to the star formation processes and the evolution of the galaxy.

Galaxies like the one we reside in, the Milky Way, consist of discs containing stars, molecular and atomic hydrogen, and helium. The molecular hydrogen gas collapses on itself in distinct pockets, forming stars, its temperature was found to be low --close to 10 kelvin, or -263 ºC and thickness is about 60 to 240 light-years. The atomic hydrogen extends both above and below the discs.

However, more sensitive observations in the past two decades have surprised astronomers. They have estimated that molecular hydrogen extends farther from the disc in both directions, up to about 3000 light-years. This gaseous component is warmer than the one straddling the disc and has comparatively lesser densities, thus escaping earlier observations. They called it the ‘diffuse’ component of the molecular disc.

How much of the total molecular hydrogen is this diffuse component of the disc remains unclear. In a new study, a researcher from Raman Research Institute (RRI), Bengaluru, an autonomous organisation of the Department of Science and Technology (DST), Government of India, has carried out mathematical calculations on the computer and used publicly available astronomical data of a nearby galaxy to pin down the ratio of the narrow and diffuse gaseous components. The study, funded by the DST, Government of India, was published in the journal Monthly Notices of the Royal Astronomical Society.

“The molecular hydrogen gas converts to individual stars under the pull of gravity, thus holding clues to the star formation processes and the evolution of the galaxy,” said Narendra Nath Patra, the researcher. If a significant part of the gas extends beyond the thin disc of a few hundred light-years, it may explain why astronomers also observe stars at a few thousand light-years perpendicular to the galactic disc. It is also essential to understand why the gas has two components, he says, and maybe tell-tale signatures of supernovae or exploding stars.

For the study, Narendra focussed on a single galaxy about 20 million light-years away from the Milky Way. The distance is relatively small compared to the size of the universe, more than 10 billion light-years. The galaxy’s proximity makes it easier to observe with telescopes, and spectral lines of carbon monoxide (CO) are available for public research. “The carbon monoxide molecule is known to accurately trace molecular hydrogen, whose spectral lines are more difficult to observe,” explains Narendra. “The galaxy I chose is very much like the Milky Way and is therefore interesting for studying the ratio of diffuse and thin components of the disc,” he adds.

The researcher used the observed spectral lines of the CO molecule to infer the three-dimensional distribution of both the narrow disc component and the diffuse component of molecular hydrogen. Estimating how the ratio of the two components varies with the distance away from the centre of the galaxy, he found that the diffuse component makes up about 70 percent of the molecular hydrogen, and this fraction remains roughly constant along the radius of the disc. “This is the first time that such a calculation has been done for any galaxy,” he asserts.

The method, although new, relies on calculations that can be carried out on computers with the help of publicly available data. Hence, Narendra is already on his way to employing it on other nearby galaxies. “Currently, our group at RRI is employing the same strategy for a set of eight galaxies whose CO lines are available,” he says. “We want to test whether the results were one-off for the galaxy I chose or if there is a pattern,” he pointed out. The search is on, and we may expect the results this year.