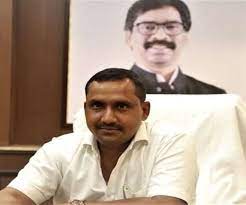 One, Gupta has ordered Bokaro Civil Surgeon to inquiry into two issues, each connected with the Ayushman Bharat Scheme, a Government of India Health Insurance programme providing  Rs five lakh to the beneficiary.

A. Why despite all facilities available in the state government run Sadar Hospital in Bokaro, several COVID patients were referred to private hospital by its doctors.

B.Enquire into the role of the Ayushman Bharat Scheme(ABS)’s Coordinator in connection with each “referred Covid positive patient” from Sadar Hospital to private hospital.

Minister Banna Gupta has directed the Civil Surgeon to submit the inquiry report within a week.” Prima facie it appears an offence that Covid patients were referred by government doctors of Sadar hospital to a private hospital”, said the Minister.

Incidentally, the Ayushman Bharat scheme’s insurance fund is transferable to this Bokaro based private  hospital. As such, Jharkhand Health Minister suspects a scam.

However, Minister Banna Gupta today told news agency ANI that the state is “on top of the list in providing benefits to COVID-19 patients under the Ayushman Bharat Scheme.”

“Health Minister slammed BJP ruled states, especially Gujarat, for lacking behind in implementing Ayushman Bharat Scheme to benefit COVID 19 patients and said that the Gujarat model is highly talked and other states are often suggested to adopt it, but it has given benefits to zero people under this scheme.”

"How sensitive are they towards the public can be easily guessed? What suggestions should I give to them (BJP ruled states)? There's an alliance of BJP in Bihar, still, they benefit only 19 patients. The Gujarat Model which BJP leaders suggest us to adopt has zero participation in the Central government's ambitious scheme. UP is a much bigger state than Jharkhand and still benefits just 875 patients. We are a tribal state. We lack finance and information, still in this adverse situation we provided all possible aid to our people."

“A total of 6.05 lakh COVID-19 patients have been treated under the Ayushman Bharat Scheme in India so far.”