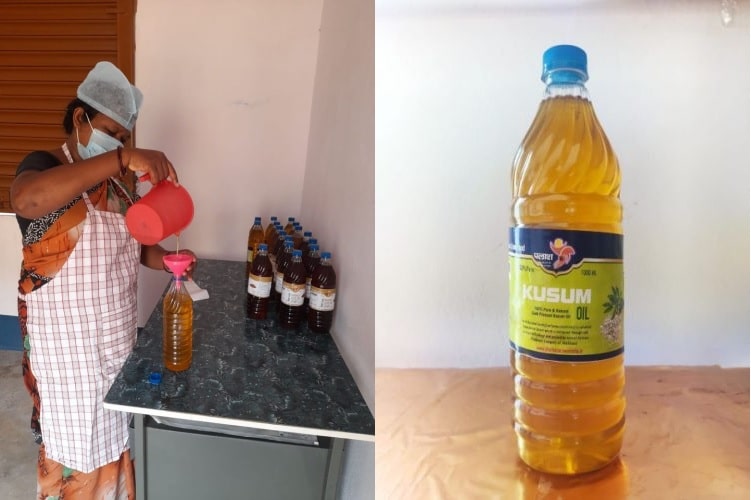 According to official records, Jharkhand has a large forest cover having a variety of forest produce. Realizing its immense potential, the government embarked on a policy of making the forest produce a source of livelihood and earnings for the farmers of the state.

With this aim in mind, Chief Minister Mr. Hemant Soren directed officials to work on the possibilities of encouraging the sale and branding of forest produce. Soon, this led to a transformation in the livelihood opportunities available to many families.
Kusum and Karanj flowers are abundant across forest stretches in the state.

It has high demand in the market. The oil of Kusum and Karanj is used in cosmetic products, insecticide manufacturing and as a medicine too. Now, with the help of JSLPS, farmers involved in the production of Kusum and Karanj are earning their livelihood through the sale of oil.

More than 12, 500 farmers are involved in the process while making additional earning of 1500 to 4000 per month. Additionally, almost 300 farmers are making an earning of up to Rs 4500 by working as a member with rural service centres.

At present-day JSLPS is working on its medicinal plant(Kusum & Karanj) project at Simdega, Gumla, Khunti, Hazaribagh and Latehar to provide opportunities to 12,500 farmers of the state. Farmers were linked with producer groups to do business. They were trained in the scientific collection of seeds. This way, they can get the right price and the collected products do not get wasted.

*Setting up the market through Palash Mart*

The farmers collect the seeds through the producer group and finally sell them to the Gramin Seva Kendra. Oil expeller units have been installed at Gramin Seva Kendra. In the process, 11.2 metric tonnes of Karanj oil has been produced and about three thousand farmers have participated in seed collection work.

With the help of Gramin Seva Kendra at Katakamsandi, Hazaribagh and Vanopaj Kisan Producer Company located in Daru block, Kusum and Karanj oil have been launched through Plash Mart and are also being sold in the open market. Additionally, 10, 000 bottles have been packed for sale to farmers, which they can use in the treatment of skin-related ailments of their animals.

Kusum and Karanj are some of the most abundant forest products in the forest areas of Jharkhand. A substantial part of it is found in Simdega, Khunti, Latehar, Gumla and Hazaribagh. Oil produced is used in many ways. Kusum oil is mainly used in hair care, cooking and as a natural moisturizer.

Karanj is an insect repellent with insecticidal and antiseptic properties and cures eczema, skin irritation, dandruff, etc. Kusum and Karanj have much use in the medicinal field, it is also used in soap making.

With a determined and progressive approach, it is the result of the visionary thinking of the state government that the use of the forest produce of Jharkhand and the economic development of the people dependent on it became possible.

“The state government is making efforts for the economic upliftment of the people dependent on forest produce. On the instructions of the Chief Minister, JSLPS is working day and night to ensure that farmers involved in forest produce farming get the right price through Palash Mart. This has also helped in boosting the confidence of the villagers. We are working on many other farm projects across the state,”said  Nancy Sahai, CEO, JSLPS.