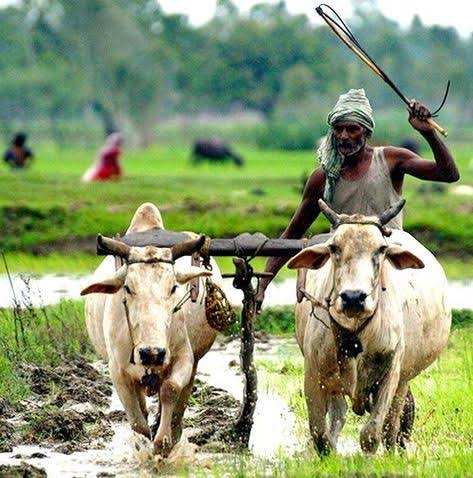 With the arrival of monsoonal rains, farmers were back in fields for the cultivation of paddy in Jharkhand.

Unlike many developed areas of Punjab where fields were dug up by tractors, most of these Adivasi and non- Adivasi farmers in this state use bullock carts to do so.

This shows the continuity of old tradition at a time when the ubiquitous bullock-cart is fast disappearing elsewhere in the country. In Ratu village of Ranchi district, which is still relying on this age-old field digging mode in the rural areas of Jharkhand.

A farmer Junku Oraon, said that bullock-carts are very convenient to drive even in the agricultural fields. Moreover, they are eco-friendly and farmers do not incur any expenditure on diesel. Another farmer, Pannu, said the farmers of the village are mostly small and marginal.

The services of their carts are hired by the farmers not only in their village but also in the neighbouring villages. The only difference between the bullock-carts of the present and the past is a replacement of heavy wooden wheels with tyres.

In 2018, the BJP government led by the then CM Raghubar Das had sent a team of 26 Jharkhand farmers to Israel to make them learn modern techniques of farming with limited resources.

Three years later, the scene is not much different though the mode of operation used by some of these Israeli returned farmers seems to have changed.

“The most remarkable thing is that people in Israel have been getting bumper produce by purchasing water from the government, whereas we in our village still lag far behind despite having plenty of water available free of cost. We are making optimum use of water by giving respect to each and every drop of it," said farmer Rajkishor Mahto of Lohardaga.

Whether it is paddy farming, fish farming or dairy farming, every activity is done jointly in a scientific way, utilizing minimum resources after forming a cooperative of at least 100-200 farmers, said Mahto.

Despite continuing to use traditional ways of farming, they are practising modern ways of cultivation, making minimum use of chemical fertilizers and getting bumper crops. I have learnt that technique and will implement it here to get better produce," said the farmer from Lohardaga.

The best part is that they have divided the area into different zones and produce, apart from paddy, one vegetable or fruit in one zone to prevent unbalanced production so that the rate is retained, he added.

Moreover, they do everything in a planned way to earn maximum money, in spite of getting the entire produce sold out in their own country.

"Similar efforts must be made here in our villages so that the fruits and vegetables which get wasted here due to lack of storage facility can be exported to foreign countries in a planned way to earn foreign currency," said Mahto.